ABOUT THE SOLAR SYSTEM

Seven planets revolving around the Sun rotate in one direction, and two in another. Each of them is inclined at a different angle. Uranus is simply rolling along the surface of the orbit. Pluto is getting in Neptune’s way. All stars-planets of the Solar System came into being in complete chaos.
All parameters of the stars were a matter of coincidence. When the Sun gained the advantage over the other stars, it was all over. Everything had to be accepted with the benefit of inventory. And so it has continued until now.
All spherical formations in the Solar System are stars (see the note WHAT IS THE ORIGIN OF THE UNIVERSE?) The greatest star is the Sun, the smallest is Mimas, a spherical moon of Saturn with a diameter of less than 400 km.
We can see on the example of the Solar System that the speed of aging of a star is inversely proportional to its size. The greatest star, the Sun, is in “middle age”. The others, many times smaller than the Sun, are already close to “retirement” or in “the retirement age” (according to the nomenclature of the note CONSTRUCTION AND EVOLUTION OF STARS).
Greater stars of the Solar System (with diameters from fifty to one hundred and fifty thousand kilometers) have already reached their “close to retirement” age. A typical representative of this class of stars is Saturn. 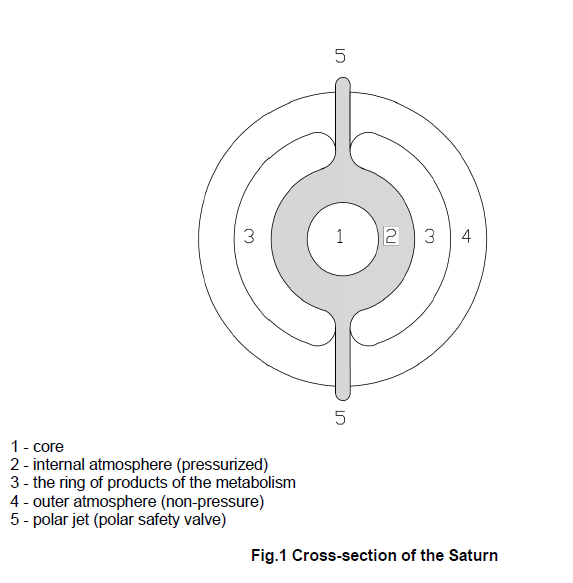 It has developed all elements of the structure of stars relevant for a star of this age. It consists of a core (1), pressurized internal atmosphere (2), ring of the waste products
(coat) (3), and non-pressurized outer atmosphere (4). It also emits a strong magnetic field. This field is probably capable of changing the magnetic poles just like the Sun does it. The core of Saturn spins faster than the rest of the sphere, therefore, at the contact point of the core and the internal atmosphere, it has its own source of heat with the temperature of a few thousand Kelvin. It emits two and a half times more heat than it gets from the Sun. Saturn as a star close to “retirement” has polar jets 5, that is efficient safety valves. The fact that Saturn has polar safety valves can be concluded from infrared photographs. 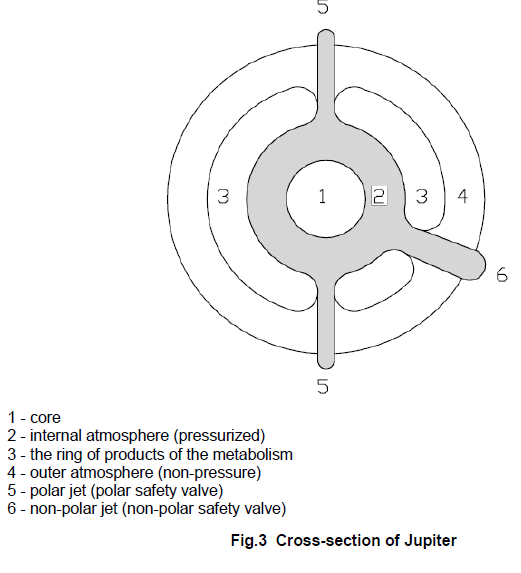 In infrared photographs it can be seen that the polar areas are warmer than the others. 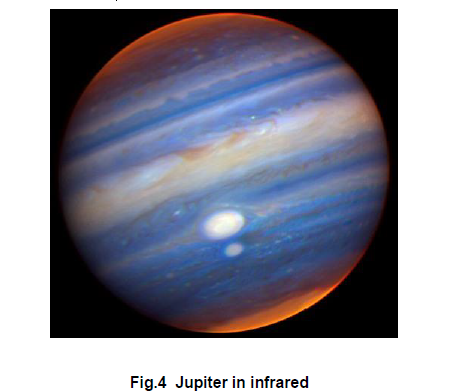 Other photographs show that exactly in the axis of rotation there are vortexes with a diameter of 2000 km within which the atmosphere is risen up over the surroundings (see photo below).
What makes Jupiter different from Saturn is not the polar safety valve (6), called the Great Red Spot (see photo below). 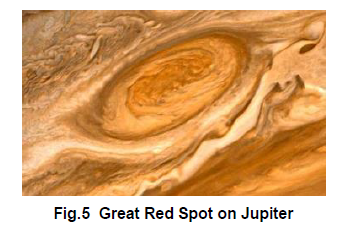 The Great Red Spot in the vicinity of Jupiter’s equator is “a hole” in the ring of the waste products, not the polar jet, a safety valve through which the star, on equal terms with polar jets, discharges the pressure of the internal atmosphere. The “hole” is so huge that the hot matter of the internal atmosphere gets out only 8 km over the level of the outer atmosphere. It has been found that the atmosphere over the Great Red Spot has a temperature of about 300 K, with the average temperature of the surface of Jupiter 150 K.
It is not known how old the Great Red Spot is but in the recent years it has been systematically decreasing, which can mean that now we have a rare opportunity to observe the sealing of a safety valve of a star. 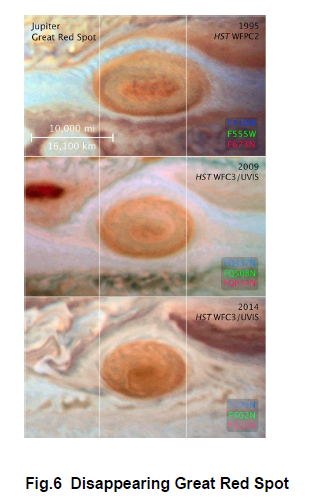 Small stars of the Solar System have diameters from 400 kilometers to several thousand kilometers. Cooling down, these stars, because of the small diameter, have not developed the outer atmosphere. Their ring of the waste products emerged immediately as the most outer layer. An excellent example of this type of stars is Earth. 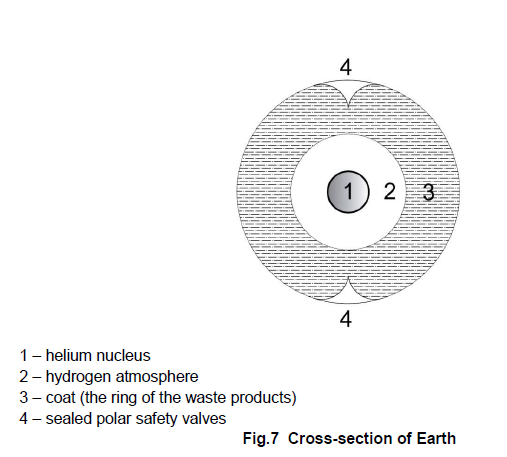 Earth is built in three parts. The most internal spherical core (1) with a diameter of 2560 km is surrounded with a spherical, pressurized internal atmosphere (2), 2250 km thick, which in turn is surrounded with a spherical ring of the waste products (3), 2900 km thick, now called a coat. The coat is a store of elements heavier than helium, formed in the border area of the core – the internal atmosphere and thrown away by the rotational movement to the peripheries of the star. Since hydrogen and helium are used to produce heavy elements, with a growing thickness of the coat, it allows to reduce the increase of the internal pressure of the gas (hydrogen-helium) part of Earth.
It can be seen in the figure above that in the area of sealing the polar safety valves (4) the coat has a specific structure. There are funnel-shaped hollows reaching almost half the thickness of the coat. These hollows result from the way the coat is closed in the polar regions of the star. It causes that on the poles of old stars, the coat is much thinner, thus this area should emit greater amounts of internal heat than it would result from current conditions. The results of studies on numerous “planets and moons” of the Solar System confirm this conclusion.
The core of young Earth was made mostly of helium, the main component of the internal atmosphere was hydrogen; in old Earth the components are probably contaminated with heavy elements.
The internal atmosphere between the core and the coat behaves like a gas coupling and the friction between it and the core is the source of the internal heat of Earth. It produces a temperature of a few thousand Kelvin. With such a temperature, the pressure of the internal atmosphere is high. The coat has to withstand the pressure. The task is difficult because the polar safety valves are already sealed. Yet Earth is not helpless. It still has a substitute of off-polar safety valves in the form of about 800 active volcanoes, which constantly or periodically discharge the pressure of the hot internal atmosphere. The volcanoes are a distant echo of non-polar safety valves of stars whose best known representative is the Great Red Spot on Jupiter.
As the coat is solid, and the core and the internal atmosphere are gas, it means that transverse seismic waves (or S waves) can propagate in the coat, while they cannot penetrate through the core and the internal atmosphere. This conclusion is confirmed in full extent by thousands of results of seismological studies. 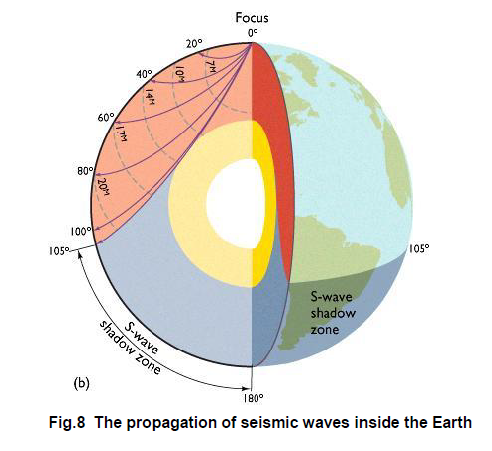 As presented in the note THE ROTATIONAL MOTION OF STARS (THE MECHANISM OF THE PHENOMENON ON THE EXAMPLE OF THE SUN), having a magnetic field is a necessary condition for a star to reach a high temperature, while a periodic change of the poles of the field is a controller of this temperature. Ascertaining the occurrence of changing the magnetic poles on the Sun and Earth is a strong evidence that Earth is a star just like the Sun. A presentation of the polarity reversal periods on the Sun (11 years) and Earth
(250 thousand years) shows that the period strongly depends on the temperature of the star (the heater the star, the shorter the period). Following this thought, we can state that in the greatest stars a polarity reversal period may take a very short time (days, hours, seconds?). The stars of the second a polarity reversal periods are called pulsars
At birth, the attributes of each star were:
shining with its own light,
rotational motion,
magnetic field,
spherical shape.
However, as stars are growing old, they lose respectively: the ability to shine, to create a magnetic field, to rotate. Therefore, at present, numerous old stars can be recognized only by their spherical shape.
An example of such a very elderly star is the Moon. It stopped shining with its own light a long time ago. The lack of a magnetic field gives evidence that the source of its rotational motion does not exist any more.
As the thickness of the mantle increased, hydrogen and helium were lost in the inner part of the star. As a result, the internal pressure decreased. Presumably, due to lack of rotation and low internal pressure, the moon no longer has a nucleus. Is the moon in the middle empty? If so, then after the blow should sound like a bell. And it sounds like a bell. This has been stated many times. From the above it follows that all the stars in the cosmos are waiting for the same end. They will end up as rock crusts.
About sad fate of a star.
The Solar System has not always been as quiet as now. Some time ago, between Jupiter and Mars, there was a star. Unhappily, it did not succeed. Due to an unfortunate coincidence (too high pressure of the internal atmosphere, a poor safety valve), there was an explosion we would describe now as an explosion of a supernova. Fragments of its ring (pieces of a solid coat) splattered around the neighborhood. Some of them are still revolving around the Sun as the asteroid belt. Among them there is only one spherical body (Ceres), probably a moon of the destroyed planet. Some fragments of the ring have been captured by the neighboring stars. They are orbiting around those neighboring stars as their pseudo moons, and they can be recognized by their vague oval shapes.