In the Universe, energy quanta are present in two forms: as quantum gas and as radiation.

Energy quanta as magnetic dipoles under certain conditions connect with each other by their poles, arrange one after another like a string of beads, thus creating rays of energy quanta. Energy quanta perform an ordered, linear, progressive motion, creating rays only when there exists a source of the quanta. A ray exists only when it extends. In order to extend, it must be connected to the source of quanta. Quanta produced by the atoms of a body (e.g. a star) form the building blocks for a still growing, extending ray. The ordered, rectilinear arrangement of the energy quanta in a ray makes the quanta move in a particular direction. One example of quantum radiation is a light ray. A single light ray is a linear stream of “connected” pole-to-pole magnetic dipoles (energy quanta, photons), in which every dipole retains its individuality, its power, the frequency of its vibrations, its “color”. A single ray of white light is like a train consisting of engines, which is moving in space thanks to new and new engines attached to it at the station. From a human point of view, this is a strange, or simply stupid, way of transport of matter, but it results from the nature of the world of quanta and in the Universe it is the fastest way of transport of quantum matter over long distances.

If a light ray is a method of transport of quantum matter in space, and a wave is a propagation of disturbances in the body without a transport of matter, then light is not an (electromagnetic) wave.

This issue is presented in details in the note DOES DUALITY OF LIGHT EXIST?

Energy quanta in the form of quantum gas fill the Universe. In this gas, light rays “travel”.

Close to the light source (e.g. a star), energy quanta have a specific stress, an initial power given to them by the star.  The further from the star, light ray quanta, being subject to resistance to motion caused by the cosmic quantum gas (called microwave background radiation) are “relaxing” slowly, losing their power, the frequency of their vibrations is decreasing, their temperature is going down, they are cooling down (see figure below).

In other words, a light ray, while breaking through quantum gas, is losing its power, “getting fatigued”, and growing weaker.  Since a light ray is formed from a certain spectrum of frequency of quanta, the whole spectrum is growing weaker.  In the range of visible light, this means disappearance of quanta on one side of the spectrum (the violet side) and appearance of quanta on the other side of the spectrum (the red side). This phenomenon is known in astrophysics under the name of “redshift”. The weakening of starlight does not end at “redshift”. The light of more distant stars reaches us as infrared waves. The light of the furthest stars does not reach us at all since the stress of its quanta diminished so much that it aligned with the stress of quanta of the cosmic environment (relic radiation), which results in mixing the ray quanta with the environment quanta.

An identical effect of “redshift” on a route of tens of kilometers occurs after has reached the Earth’s atmosphere. The entry of a ray into the atmosphere means an entry into much denser quantum gas, therefore resistances to motion of the ray also increase. The resistances increase so much that quanta of UV radiation “cool down”, partially to the violet color, and mainly to the blue color of the visible radiation. It results in the fact that in sunlight, in the upper atmosphere, the blue color appears to be overrepresented (see photo below). 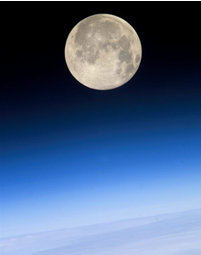 The result of this process is the blue color of the sky on a sunny day and significantly reduced (from 8 to 3%) amount of UV radiation in the Earth’s atmosphere. In parallel with the process described above, red color radiation quanta “cool down” to invisible IR radiation whose frequency range does not occur in the initial solar irradiation. It results in the fact that in sunlight, infrared radiation of a specific frequency appears to be overrepresented, which results in an increase of the temperature of all Earth’s atmosphere. Therefore, the average temperature of the surface of the Earth, instead of minus 19 degrees Celsius, is plus 15 degrees Celsius.

Even more quickly than in the Earth’s atmosphere, because on a route of a few millimeters, “redshift” is realized when a light ray goes through a simple pane of glass. The density of quantum gas of glass causes that quanta of UV radiation reduce their power, “cool down” to the violet color, by which there are virtually no UV rays in a greenhouse. Visible radiation quanta (of the red color) reduce their power, “cool down” to quanta of invisible IR radiation, thus it gets very warm in the greenhouse.

Therefore, there are three quantum phenomena of “redshift” and a number of various related to them consequences in the macroworld. And how is it perceived by the modern physics? It claims that:

– The blue color of the sky is a result of light scattering on particles of the gaseous components of the atmosphere.

– An increase of the temperature of the Earth’s atmosphere is a “trick” made by carbon dioxide present in the atmosphere.

– A reduction of UV radiation content in the atmosphere is indebted to the presence of ozone in it.

The above confirms with extraordinary sharpness the oft-repeated thesis that the lack of knowledge on the existence of the world of quanta makes physicists seek the explanations for quantum phenomena in the world they know, which is the world of atoms.

Nowadays, physicists find a casual relation of the cosmic phenomenon of “redshift” only with the relativistic Doppler effect and they use it to determine the distance of stars and galaxies from the Earth.

It follows from the above considerations that it is an error. This would make sense if the cosmic quantum gas a light ray “travels” in always had uniform density (temperature). It is known, however, not to be true. If a ray from a given star (galaxy), at some point of its journey towards the Earth, goes through quantum gas of a higher density (temperature higher than 2,725 K), “redshift” will be observed and on this basis physicists will calculate a larger distance of the star (galaxy) from the Earth than it really is. In this situation, although the object has no distinctive features with reference to its brightness against neighboring objects, due to the previous calculations of a vast distance from Earth, physicists force us to take their word for its bright light, for it is a quasar, a completely qualitatively new body in the Universe.

But this is not a qualitatively new body; this is an error in reasoning resulting from the lack of knowledge that in parallel with the world of atoms, there exists the world of quanta and the subquantum level of the organization of matter.