In 2017, using sophisticated research tools, physicists confirmed with great accuracy that the Universe consists of a fundamental symmetry between particles and antiparticles.

Christian Smorra, the first author of the above research, said: “All of our observations find a complete symmetry between matter and antimatter, which is why the Universe should not actually exist”. Since the Universe exists, somewhere next to matter there must be antimatter.

It follows from the above that in their research and theoretical considerations, physicists should focus on searching for antimatter in the contemporary world. Thus, they should stop considering how, where, and when antimatter “disappeared”.

As shown in the main elaboration, a proton is made from electron-positron pairs known in physics as positronium (see Figure 1).

At one (upper) end of this layer cake is placed a positron providing the whole proton with a charge E(+). This positron, as the only one in the proton, is odd. What conclusion can be drawn from this? In a proton, there is almost the same amount of matter (electrons) and antimatter (positrons). Almost the same, because there is one positron more. It follows from the structure of an atom presented in the main elaboration that in an atom in front of every proton, an electron is placed which neutralizes the charge of this proton (see Figure 3). 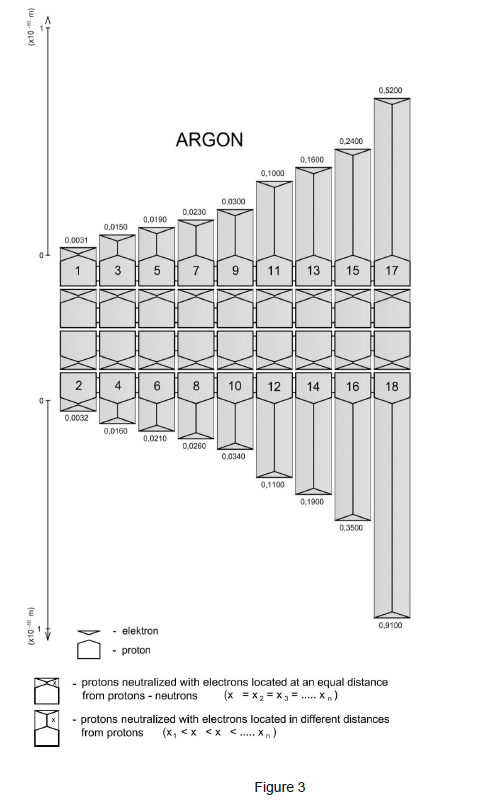 In the example atom of argon, in neutrons, these electrons are arranged very close to protons, at the same distance from them. In the case of the remaining protons

Since the Universe is made of atoms, this means that it is made of the same amounts of matter and antimatter.

The material Universe is made from the same number of electrons and positrons.

All the antimatter (all positrons) are components of a proton.

Thus, we can say that antimatter, searched for over a hundred years, has been unexpectedly found. Exactly each piece of antimatter has been found.