In this note, we are going to explain what the evolution of dark energy from the kinematical side is.

Since dark energy particles are dipoles, they can form lines and more complex two-dimensional linear elements, that is energy quanta. 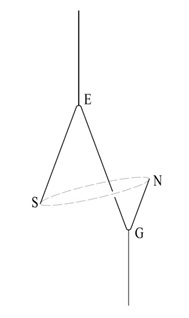 A possible zero velocity of an electron and positron means that these particles of matter can connect with each other, which gives rise to the creation of proton that is made from electrons and positrons.

In a proton, and thus in all atomic nuclei existing in the Universe, electrons and positrons still vibrate with different frequencies. This motion is invisible outside. Protons perform only one kind of movement, that is progressive motion. During this motion, they collide with each other. The progressive motion of protons (atomic nuclei) is triggered by energy quanta. During this motion, they collide with each other. The collisions of atomic nuclei are not perfectly elastic. Between collisions, atomic nuclei can reach the speed from several thousand to almost 300000 km/s. This speed is too high for greater than nuclei forms of matter (atoms) to come into being.

Atoms are only formed when atomic nuclei are supplied with speed of movement retarders, that is electrons arranged at different distances from the protons. Then, atoms are subject to such a great resistance to motion that they slow down to a speed of several hundred kilometers per second. The collisions of atoms at such speeds result in the oscillatory motion of electrons building an atom. Vibrating electrons produce quanta of energy from dark energy particles. Collisions of atoms are not perfectly elastic. As it is apparent from the above, atoms made of modified quanta (electrons and positrons), just like quanta of energy, perform two kinds of movement, progressive motion and oscillatory motion.

With atoms moving at a speed of the order of several hundred kilometers per second, it becomes possible for atoms of a particular element to form solids, liquids and gases. Atoms in gases move in a random motion, in liquids the motion is partially random and partially ordered, while in solids this motion is completely ordered. The complete ordering is that the atoms of solids move and collide along the same strictly defined segments which constitute the edges of various polyhedra in a solid. This is how the crystal structure of solids originates. Although atoms in liquids, gases, and solids move at a speed of several hundred kilometers per second, these bodies as a whole have zero speed, have zero kinetic energy.

The above can be described in brief.

If we compare points 1 and 6, we will note that the kinematical evolution of dark energy was about finding a way of transition from constantly moving particles of dark energy to being immobile solids.

As it is seen, this task was performed excellently.

Once again, this note shows how much Model 31 is different from the modern physics. Model 31 allows to present step by step the kinematical evolution of dark energy (ether), while physicists are not even able to establish a position regarding the existence of dark energy. These differences result from the lack of knowledge on the presence of subatomic and subquantum level of the organization of matter.