THE ESSENCE OF A DOUBLE-SLIT EXPERIMENT

First, we will discuss the experiment in the photon version.

As previously mentioned, quanta are present in two forms: as light rays and as quantum gas. Light rays move from the source to an arrangement of two slits. Quanta emitted from the surface of the narrow slits, which move perpendicularly to the rays, change the rays into quantum gas. The slit works here like a kind of a chaff cutter cutting the rays into individual quanta. Because new quanta still come to the slits, the quantum gas produced in the slits has to leave them. The gas leaves each slit as a classical, gas, spherical wave. These waves interfere with each other, and interference fringes appear on the screen beyond the slits.

Now, we will discuss the electronic version of the experiment.

A heated cathode, sometimes called an electron gun, “launches” energy quanta contaminated with electrons.  We cannot see the quanta because they are quanta of infrared radiation. These quanta convey the contaminated electrons towards the slits. The electrons are passive here, they are like leaves carried by the wind. In the slits and beyond them, everything proceeds like in the photon experiment. Quantum gas emerges; two spherical waves are created from the gas; the waves interfere with each other; infrared interference fringes appear on the screen. They are invisible because the detector is to detect only electrons. The electrons are transported by the quanta of infrared; they are randomly carried to one or the other slit, they travel the same way as the quanta and they hit the same places on the screen as the quanta. Where more quanta hit, there more electrons hit; where there are less quanta, there are less electrons either. This way on the screen, with a long delay, interference fringes of electrons appear. The fringes appear exactly in the places where are invisible for the detector the infrared interference fringes.

These are secondary fringes, “junk” fringes.

Physicists are not aware of the existence of the world of quanta, assuming that a cathode is a gun launching missiles – electrons. If they place two slits on the way of these “missiles”, they can by no means understand how individual electrons, which hit the screen every few minutes, create interference fringes on it.

The above considerations provide the material for carrying out an experimentum crucis, a crucial experiment for the quantum mechanics and Model 31. Its course would be as follows: 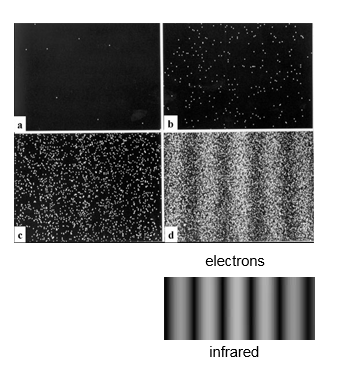 If fringes of quanta of infrared radiation are created in the places where previously there were electron fringes, then we will be able to say to the quantum mechanics: