WHAT IS ELECTRIC CURRENT?

It follows from the considerations in the main elaboration that the nucleus of every atom is formed from neutralized protons, which are elementary gravitational charge carriers. Neutralization of a proton means that in front of every proton, in different distances, an electron is placed (see Figure 1). 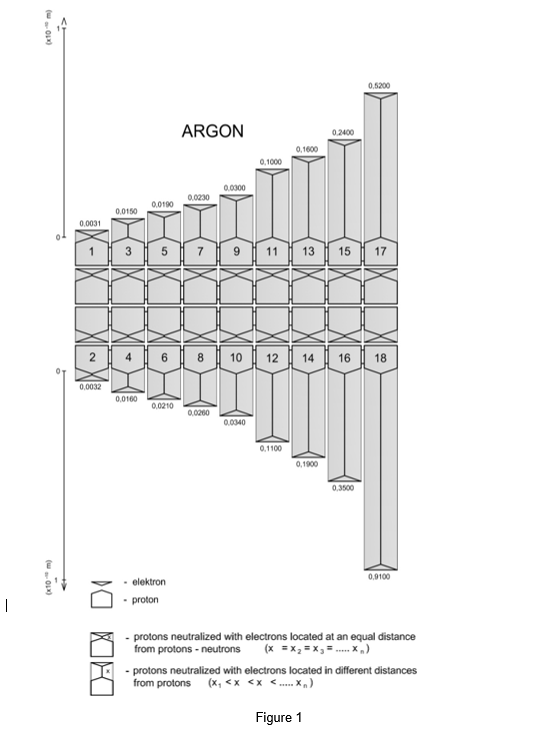 The figure above shows an uncurled atomic spiral of argon (curling of the spiral goes from the right to the left). From Figure 1 it is clear that every neutralized proton, being a carrier of an elementary gravitational charge, is at the same time a proton-electron type electric dipole. To be more precise, this is an electric dipole positron-electron loaded with electrically neutral ballast from the side of the positron. Electric dipoles of an atom on the odd (1-3-5) and on the even side (2-4-6) of a nucleus are parallel to each other, while in a particular pair (1-2),(3-4) they are in a line and directed contrariwise.

Every electric atomic dipole has a dipole moment.

r – distance of an electron from proton [m]

From the Coulomb’s law 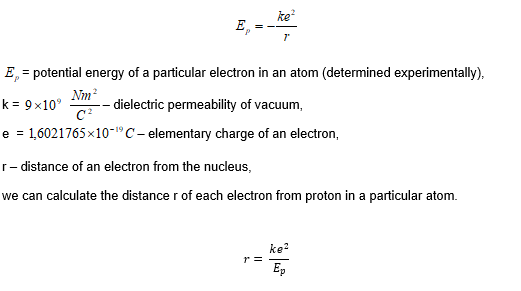 Such values of dipole moments can be calculated for an atom of any element in the periodic table.

The value of the total electric dipole moment can be calculated for an atom of any element in the periodic table.

The values of total electric dipole moments of different atoms do not exceed several units. A small value of total electric dipole moments is due to their compensation as a result of so called pairing phenomenon. Pairing means that electric dipoles of each pair of protons take up antiparallel positions. This is a classical realization of the aim to minimize potential energy through the physical system. The value of the resultant of the electric moment of an atom depends on the values of several last dipoles. These considerations are perfectly illustrated by Figure 1.

Other than zero, the total electric dipole moment of an atom means that in an electric field, each atom, if possible, will try to take up a position parallel to the lines of the electric field, as presented in Figure 2. To make it more clear, an atom of helium was adopted for the considerations. 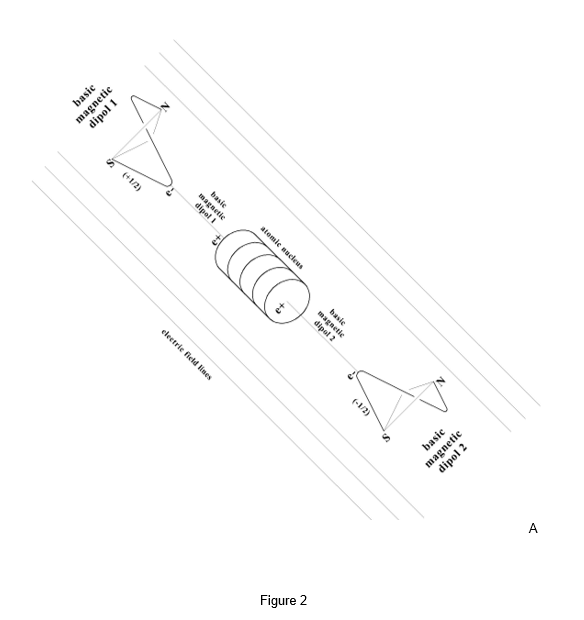 The higher the resultant value of the total electric dipole moment of an atom, the more parallel position to the lines of the electric field the atom takes up.

Figure 3 shows a view A of the atom presented in Figure 2. 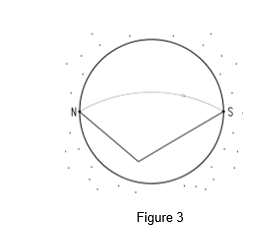 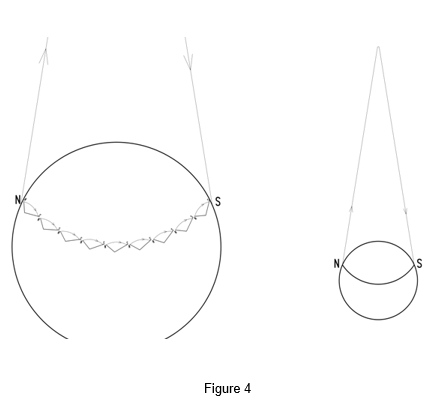 In this conductor, under the influence of electric field, atoms are trying to take up the position as shown above. Parallel to each other and crosswise to the cross-section of the conductor, the atoms are connecting with each other by the magnetic poles of electrons, thus creating a secondary, multi electron magnetic dipole N-S. Asymmetrical structure of the electrons causes that a dipole formed by these electrons is not straight but it bends in the shape of a crescent. As a result, outside of the conductor, there appears a line of the magnetic field of this dipole. Such a line, formed directly by a physically existing magnetic dipole, is the first-order line, the primary line. In a conductor with current, there is a huge number of such magnetic dipoles. A system of primary magnetic lines of these dipoles is shown in Figure 5. 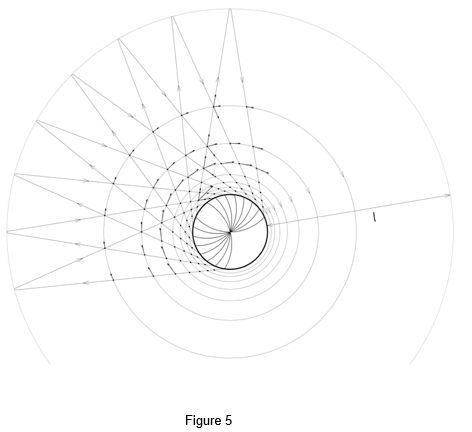 At the intersection points of these lines, there are the resultants of the force vectors, which form new, closed, circular magnetic lines. The closer to the conductor, the stronger the lines are and the denser they are arranged. They are secondary lines, the second order lines, which were nor formed directly by magnetic dipoles. It turns out that the circular lines of the magnetic field of a conductor with current, in a solenoid with current, form the lines of the following, third order. They are also closed lines but of more complex shape (see Figure 6). 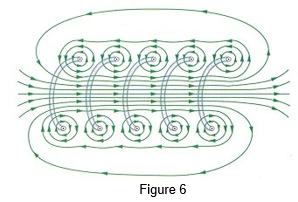 This way, only on the basis of theoretical considerations resulting from Model 31, it was shown how a magnetic field is formed  around a conductor with current.

Such a shape of the line causes that it has a few opposite, situated close one to another (almost antiparallel) vectors of force. As it turns out, a human is not able to reveal the existence of such lines. All “human” detectors of magnetic field are too awkward to detect a magnetic line constructed in such a specific way. Thus, a human would have never known about forming a magnetic field by a conductor with current (we would have never built an electric motor), had it not been for the fact that the lines intersect each other as shown in Figure 6, and the resultants of the force vectors of these lines form new, secondary lines of the magnetic field in the shape of a circle (see Figure 8). 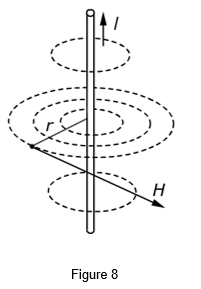 All the force vectors of these lines are tangent to them and arranged in the same direction so that they can be detected, for example with a magnetic needle. For the first time it was done by Hans Christian Oersted in 1820.

After this theoretical introduction, we can answer the question.

What is electric current?

Electric current is the ordering of atoms in a conductor, which have other than zero, the total electric moment, under the influence of an external electric field. Simultaneously with this process, the above mentioned atoms form secondary magnetic dipoles in the conductor, which results in the formation of a magnetic field in the space around the conductor.

For example, the total electric moment is

The elements whose atoms have a low value of the total electric moment are now called bad conductors of electricity.

For example, the total electric moment is

A few years ago, a Polish professor of physics from the USA  said:
“I wonder and I won’t stop wondering why elements adjacent to one another in the periodic table [nickel (28) and copper (29), palladium (46) and silver (47), platinum (78) and gold (79)] are so much different in electrical conductivity”. In each pair of these metals, one is a very good conductor of electricity (copper, silver, and gold), while the other is a very bad conductor of electricity (nickel, palladium, platinum). It looks like the professor can stop wondering. Gold, silver, copper are good conductors of electricity because their values of total atomic electric moments are high. Platinum, palladium, nickel are bad conductors (they are good resistors) because their values of total atomic electric moments are low.

The higher the level of ordering of atoms in a conductor (the greater current intensity), he more disturbed the movement of atoms in the crystal lattice of the conductor, the more difficult the outflow of energy quanta produced by electrons of these atoms, which results in an increase in the temperature of the conductor.

An important conclusion results from the above considerations. 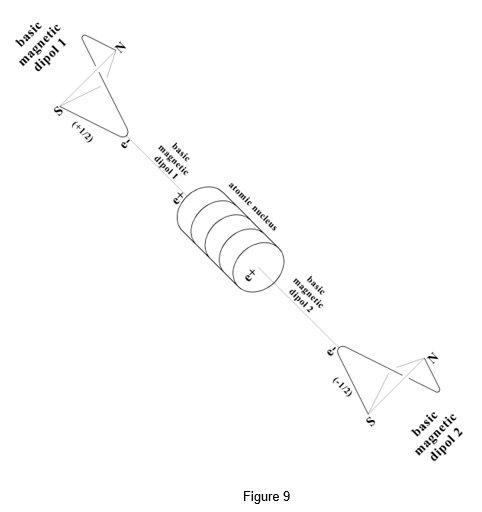 Nowadays, a definition of electric current applied in physics reads as follows:

Electric current is an ordered movement of charges in a conductor, which occurs under the influence of electric field.

According to Model 31, a definition of electric current reads as follows:

Electric current is the ordering of atoms in a conductor, which have other than zero, the total electric moment, under the influence of an electric field.

The above means that, according to Model 31, electric current has nothing in common with a movement of charges in a conductor.

Such an approach to the problem allows to explain why electric currents appears “immediately” in the whole conductor regardless of the length of this conductor. The ordering of atoms which have other than zero, the total electric moment is not connected with their progressive motion. In the case of direct current, it only depends on a one-off rotation of atoms from 00 to 1800 (an arrangement along the lines of the electric field). This arrangement is as fast as the electric field is propagating in the conductor. The propagation of the electric field is a subatomic phenomenon occurring at a speed close to the speed of light. Inertia of the electrons whose motion, according to the current definition, is supposed to be the essence of the flow of electric current is not significant here. In the case of alternating current, atomic dipoles change their position by 1800 every time the electric field changes its direction.

Such an approach to the problem also allows to explain why it is possible to charge a capacitor, although it is an evident break in the electric circuit.

In a capacitor before charging (Figure 10a), the charges of the plates (atoms which have other than zero, the total electric moment) are disorderly.

For the above case, a definition of electric current based on a movement of charges has proven to be absolutely incorrect. To save this view, J. C. Maxwell introduced to physics quite a new being called displacement current. This ad hoc created concept was necessary to maintain the continuity of current in the space where the charge is not carried. Assuming that, while charging a capacitor, the current flows to one plate and flows away from the other, it had to be presumed that it also flows between the plates in order to maintain the continuity of current in the circuit.

Let us now consider what happens in a charged capacitor (Figure 11a) between whose plates a dielectric has been inserted (Figure 11b). 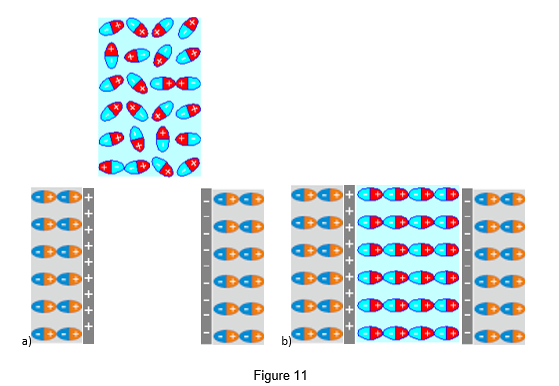