CONSTRUCTION AND EVOLUTION OF STARS

At the time of their creation, all stars were constructed in the same way. They differed only in size. Each star had a nucleus and atmosphere. The nucleus spun faster than the atmosphere, which caused that at their contact point there occurred the phenomenon of friction, which is a source of enormous amounts of heat. In this way a star shines. This is how a star looks like soon after its birth, that is in its “infancy”. 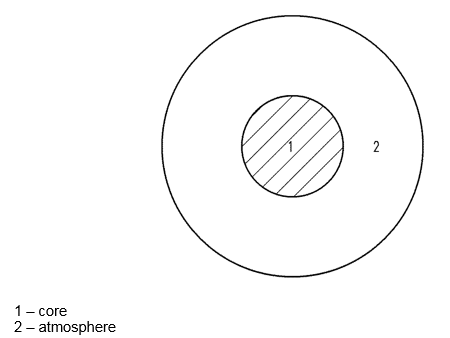 However, not all stars shine in the same way. Bigger stars have bigger nuclei. At the same speed of rotations, bigger nuclei have a greater linear velocity at the contact point between the nucleus and the atmosphere. On the other hand, a greater linear velocity of the nucleus results in a greater amount of heat caused by the friction between the nucleus and the atmosphere. Thus, stars of various sizes have various temperatures. Bigger stars shine brighter and they have higher temperatures.

The above means that the source of heat of a star is mutual friction of its nucleus and atmosphere, and a suitably high temperature is a necessary condition of a nuclear fusion, which results in the creation of heavy atoms (atoms of heavier elements than hydrogen and helium).

Figuratively speaking, the role of a star is to boil hydrogen and helium as long until they form the remaining elements in the periodic table.

Over time, the number of nuclei of heavy atoms is growing. The star is not able to “expel” those “waste products” so they are deposited in its interior. The density of these “products” greater than the density of other components and the centrifugal force caused by the rotational movement of the star result in the fact that heavier elements accumulate in the form of a ring in the equatorial area of the atmosphere of the star (see the figure below). At this stage, the ring is an atmospheric component slightly “contaminated” by nuclei of heavier elements than helium and hydrogen. No worrying symptoms can be observed outside the star. It shines as usual; it is in “adolescence”. 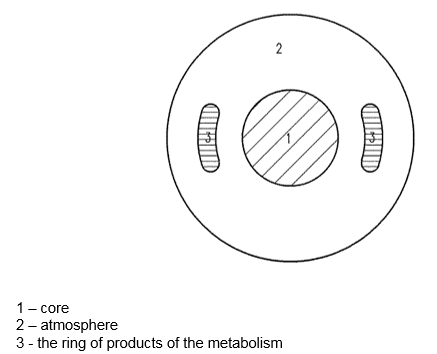 The structure of a star in “adolescence”.

Over time, the amount of “waste products” is growing. The ring is getting bigger. The star is entering “the middle age”. This is the age of our Sun. 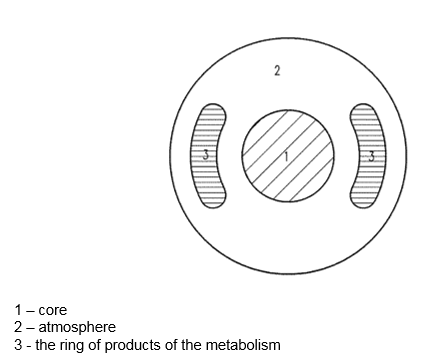 The structure of a star in “middle age”.

For a layman, the Sun shines as usual. However, an expert will notice the first symptoms of middle age crisis, which means the aging of the star. 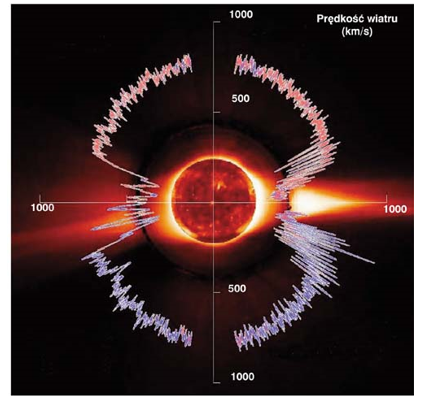 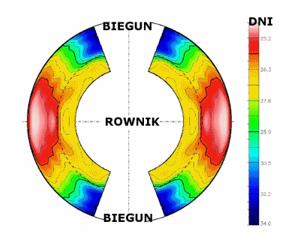 Differentiation of the angular velocity at which different parts of the surface layer revolve around the Sun. 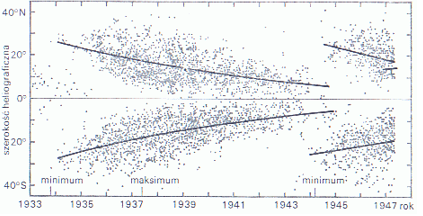 Distribution of the sunspots depending on time and heliographic latitude.

The ring of the waste products is hidden under the surface of the atmosphere of a star, but in the case of the Sun three above mentioned phenomena allow to determine its size quite accurately.

At present, inside the Sun, it reaches more or less the fortieth parallel on both sides of the equator. Such clear symptoms of existence of the ring of the waste products may indicate that its density is much greater than other components of the star.

Over time, the number of heavy atoms is growing. The ring of the waste products is growing in the direction of the poles, it is getting denser, it is becoming a liquid. The star is entering “adulthood”. 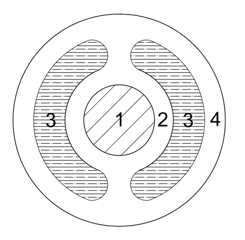 The structure of a star in “adulthood”.

Over time, the ring of the waste products is growing and becomes denser and denser, and thus more stable. The periods between the consecutive destructions and restorations of the ring, that is the periods between the consecutive brightenings and darkenings of the star become longer and longer. The brightenings and darkenings become more and more violent. From a distance they look like star explosions. This is how nova stars work.

Over time, the ring is growing and becomes harder. It already acquires the character of a solid. Its stability is already so great that it is not destroyed under the pressure or temperature of the inner atmosphere. 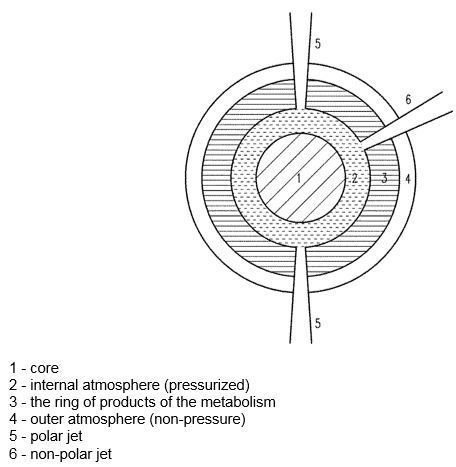 The structure of a star close to “retirement”.

In the first period of existence of the above mentioned star, its ring is still not strong enough. Despite the existence of the polar jets, the pressure of the inner atmosphere can “make holes” in any point of the ring. Through such a hole, under a great pressure, the gas matter also escapes into Space. Such a non-polar jet (6), under the spin of the star, curls into a spiral. This is how a disk of gas matter arises, which like “a smokescreen” covers the star that created it. An artistic vision of a star close to “retirement” is presented in the figure below. 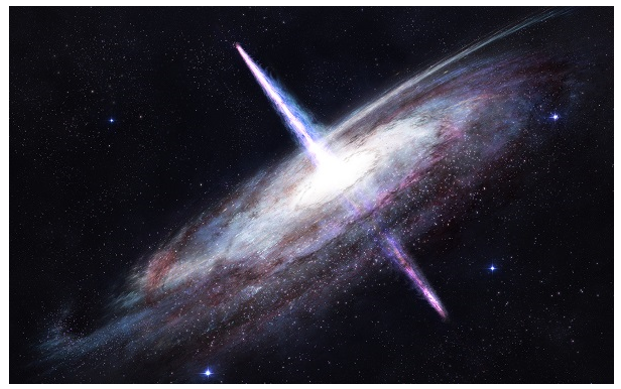 Now the disk is quite providently called an accretion disk, and the masked star is called “a black hole”.

The described above polar and non-polar jets are safety valves through which the star, at the expense of a mass loss, discharges the pressure of the inner atmosphere.

The time before retirement can not last forever. Heat is still produced inside the star; nuclear fusions still take place.  The ring of the waste products is growing and becomes harder and harder. The safety valves begin to seal. First, one polar jet disappears, the other one start to work with brakes, and eventually it disappears as well. When all the safety valves are sealed, the star will be unnoticeable for an external observer. This way the star has entered the retirement age. 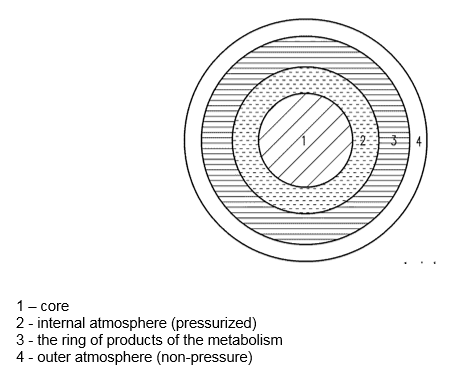 The structure of a star in the “retirement” age.

Although the star does not shine, inside it the nucleus is spinning, heat is produced, the pressure and the temperature of the inner atmosphere are growing, as well as is growing the thickness of the ring which keeps the star together. This is a kind of a balance of powers. The star reduces excessive pressure and excessive temperature by temporary opening the previously sealed safety valve. When the valve opens, a stream of gas matter escapes to the outside in the form of so called gamma-ray burst. Lasting from a few seconds to a few minutes a discharge of gas matter results in a decrease in the pressure of the inner atmosphere and the valve seals again. By a gamma-ray burst, non-shining stars in some measure announce their existence and show how great a temperature consumes their interior. Despite sealing all the safety valves, the process of heat production inside the star continues. If the ring can not withstand the increase in the pressure of the inner atmosphere, then ia fraction of a second it gets torn apart, and the space around the star gets filled by a rapidly expanding ball of hot gas mixed with white-hot fragments of the ring of the waste products. This is how supernovae work.

This mixture of the fragments of the ring and discarded outer atmosphere is called a planetary nebula.

In the case of large stars, the ejection of the ring of the waste products does not mean the death of the star but its “rejuvenation treatment”.

It is easy to notice that if a star in the retirement age (A) discards the ring of the waste products and the non-pressurized outer atmosphere (3 and 4), then its remainder (B) has an identical structure as when it was in its infancy (C).

This “rejuvenated” star shines bright again, beautifully highlighting the planetary nebula which  came into being after the explosion. (see the figure below). 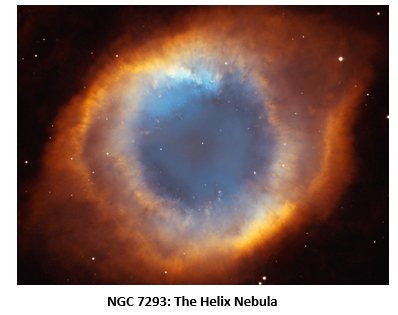 If we magnify the proper part of the above figure, we may see fragments of the discarded ring of the waste products. 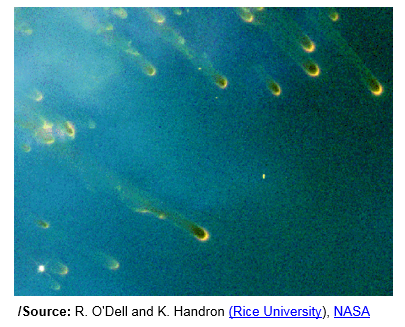 The above “rejuvenation treatment” can be repeated as presented in the figure below.

A – in the retirement age for the first time

B – after the first rejuvenation treatment

C – in the retirement age for the second time

D – after the second rejuvenation treatment

The  final star in this chain (D) is already very small but it shines very strongly, therefore it is called a white dwarf.

Some stars have already undergone such a double “rejuvenation treatment”.  Here is an example. The photo below shows the Cat’s Eye Nebula as seen through the Hubble telescope. 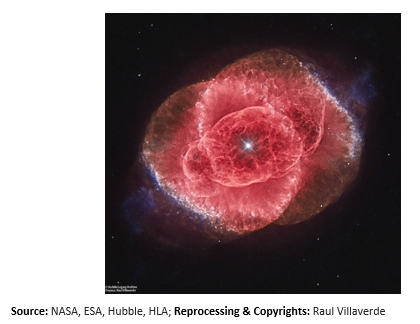 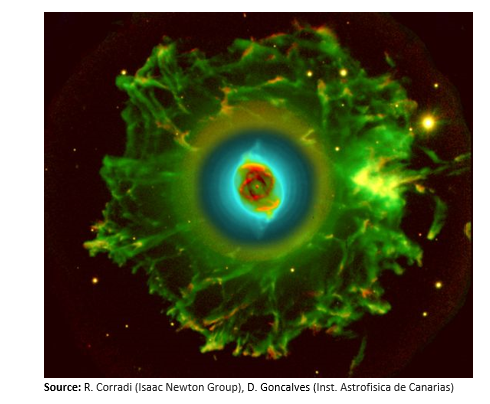 The above photo shows the same nebula in a broader perspective. Here, the nebula from the previous photo occupies only a central area of a bigger nebula. This is strong evidence that the Cat’s Eye is already the second, younger nebula created by its central star.