DOES DUALITY OF LIGHT EXIST?

In the beginning of the twentieth century, Planck (a black body), Einstein (the photoelectric effect), and Compton (the Compton effect) clearly proved a corpuscular nature of light. Physicists should acknowledge this fact and focus all their intellectual efforts to show that the existing, nineteenth-century concept of light as an electromagnetic wave is wrong. We will demonstrate below that the phenomena which would show the wave nature of light can be much better explained by the corpuscular theory.

Let us take into account a single quantum from the sea of energy quanta filling the universe. In a high-magnification it looks as follows 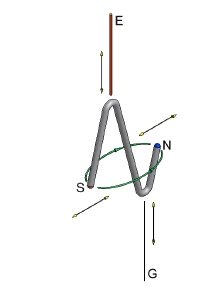 This is a string in the form of a flat, two-dimensional little spring. Affected by particles of dark energy, this spring performs an oscillatory motion. The more it is stressed, the higher the frequency of its vibrations. This frequency may reach the values from 100 to 1020 and more Hertz. In addition to its oscillatory motion, the quantum performs a progressive, linear motion. Its velocity is always 299792458 m/s.
Vibrating ends and apexes of the little spring produce lines of forces from dark energy. Vibrating with various frequencies two ends of the little spring (N and S) produce the lines of force of the magnetic field.  Vibrating with various frequencies two apexes of the little spring (E and G) produce two lines of fields, distinct in terms of “force”, parallel to each other and perpendicular to the lines of the magnetic field. In the figure, the “force” of these lines is reflected in their thickness. These lines are precursors of the three types of fields which occur in nature. In the next stage of evolution, the lines N and S will become the source of the magnetic field, the lines E will become the lines of the electric field, and the lines G will be the lines of the gravitational field. As shown in the main elaboration, pairs of electrons in an atom emit pairs of energy quanta, which immediately form a complex quantum connected with the magnetic poles (see the figure below). 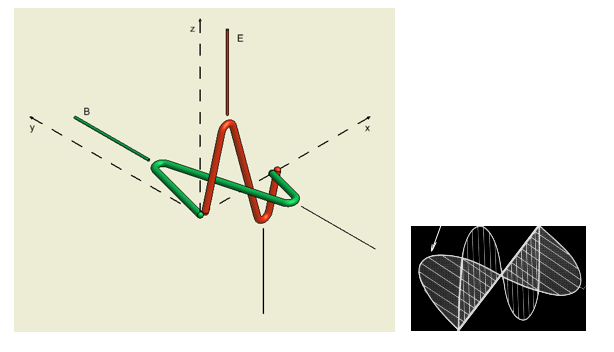 – The “vector” of the electric field is perpendicular to the vector of the magnetic field.

– The “vectors” of the electric field and the magnetic field are “in the same phase”.

At the first glance it is obvious that a complex quantum confusingly similar to a single “modulus” of an electromagnetic wave presented in all physics textbooks (on the right side in the figure above).

Each complex quantum has free two magnetic poles, which means that it can connect with other complex quanta, thus creating a light ray (see the figure below). 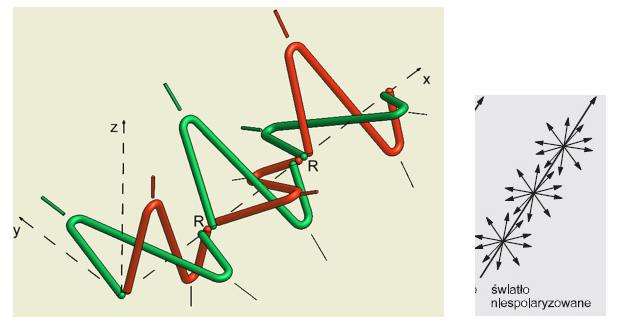 The connections R on the x axis of individual complex quanta are punctual, so the “vectors” of the fields of these quanta be set at any angle to each other. “These “vectors” vibrate with the same amplitude and with the same probability in all directions perpendicular to the x axis, that is to the direction of the “wave” propagation.

Such a light ray successfully pretends to be an unpolarized electromagnetic wave.

Under certain conditions, the rotary connections R of complex quanta may be immobilized in such positions that their “vectors” of the electric field will vibrate in the same plane (see the figure below). 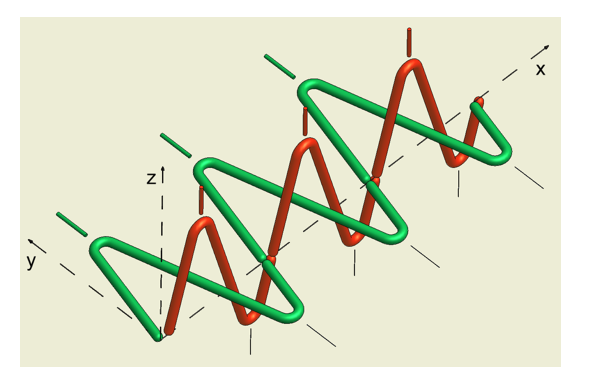 Then, a light ray may pretend to be a linearly polarized electromagnetic wave (see the figure below).

In other certain conditions, complex quanta can perform out-of-phase rotations around points R on the x axis (see the figure below). 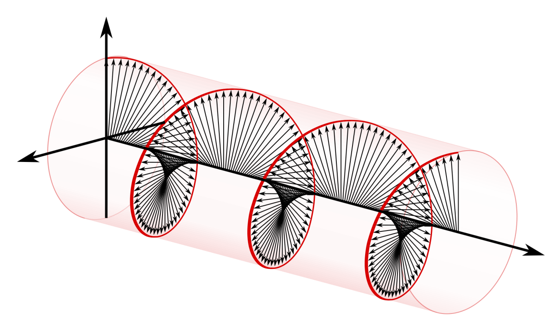 Such a light ray may pretend to be a circularly polarized electromagnetic wave.

As it is apparent from the above, light as an electromagnetic wave is a desert mirage. However, in order to realize this we need the knowledge on the existence of the subatomic levels of the organization of matter. The lack of this knowledge has led physicists to start talking about corpuscular-wave instead of corpuscular only nature of light.