THE ATOM OF HYDROGEN AND NEUTRON, WHAT DO THEY HAVE IN COMMON?

The structure of an atom of hydrogen is very similar to a free neutron (see Figure 1). 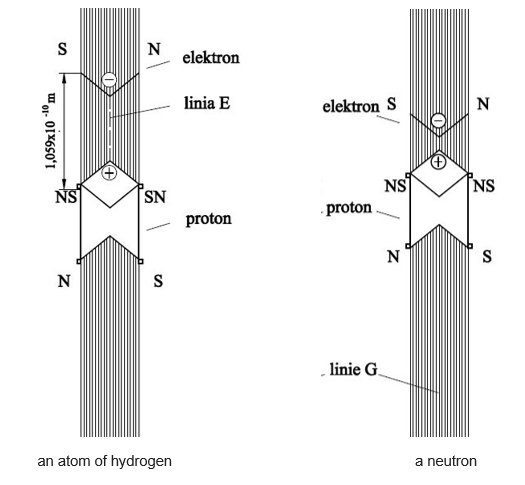 Here are examples of calculations.

Neutrons in atoms move at a speed of several hundred meters per second, while a free neutron moves at a speed of 22 000 000 m/s. Probably this speed is the cause of instability of a free neutron. A free neutron, moving in quantum gas at a speed tens of thousands of times greater than a combined neutron in an atomic nucleus, is subject to such a great resistance to motion that it decays into proton and electron.

Another example of the similarity of construction of a neutron and atom of hydrogen is the following fact. Four in a million occurrences does not end with a free neutron decay, but an atom of hydrogen is created. In these cases, an electron does not break off but it is moved away from the proton to a distance of     1.059 x 10-10 m, so the neutron, becoming a hydrogen atom, is able to slow down to a speed of several hundred meters per second.

The whole matter of the Universe is composed of electric dipoles, which form atoms. Dipole matter (atoms) in their motion in quantum gas create such powerful resistances that they can reduce their speed to several hundred meters per second. This reduction in speed made it possible for solids, liquids and gases to be formed from atoms. Non-dipole matter (atomic nuclei), that is dipoles without electrons, in their motion in quantum gas create such small resistances that they have to move at speeds of the order of tens of thousands of kilometers per second.

The above is a direct powerful evidence for the existence of the subatomic world of energy quanta, which creates resistances to motion for the particles moving in this world.

Finally, we will show how presented in Figure 1 an atom of hydrogen and neutron combine and form a deuterium atom (see Figure 2). 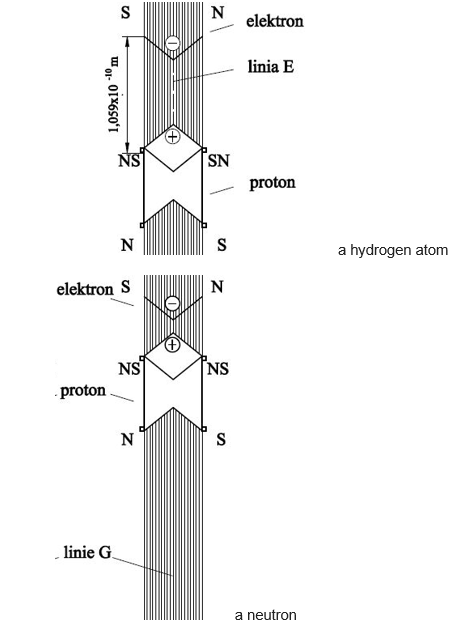