THE ESSENCE OF THE OPERATION OF THE EMDRIVE THRUSTER

EM DRIVE is a device invented by Roger J. Shawyer. It produces a thrust without exhaust fumes. It is said to work contrary to the laws of physics. 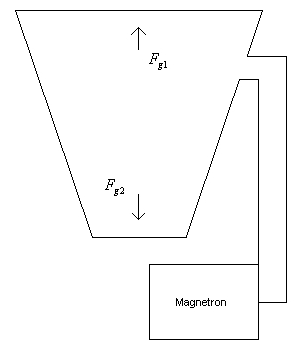 According to Model 31, the EmDrive works as follows. The magnetron emits energy quanta (quantum gas) of the microwave frequency. The quanta are “pumped” through the waveguide to a closed truncated cone. The gas pressure in the cone rises. The walls of the device are the insulation for quantum gas but only to a certain degree, because there does not exist a perfect insulation for energy quanta (this issue is discussed further in the elaboration “HOW TO RAISE THE BODY TEMPERATURE WITHOUT HEAT SUPPLY FROM THE OUTSIDE?”). When the pressure of this gas has risen enough, the cone starts to “leak” in certain areas. Quanta escape from the cone like air from a leaky balloon. The phenomenon of propulsion arises; a thrust appears. This is in full compliance with Newton’s third law of motion. In the “leaking” areas, microwave quanta mix with the quanta emitted by the walls of the cone, which, just like in a microwave oven, rises the temperature of these areas. Energy quanta propagate in all directions, but the thrust produces only the direction where the emission of quanta is the highest. The stronger the power of the magnetron, the higher the pressure of the quantum gas, the greater the force of the thrust. However, such a dependency occurs only up to a certain point. At a specific gas pressure produced by the magnetron with a particular force (50 kW), the walls of the cone are already so permeable for quanta that a balance is set among the number of quanta entering and leaving the cone. This is the maximum thrust possible for a given device.

The force of the thrust of a typical rocket engine is given by the formula:

v – the velocity of the exhaust fumes [m/s],

In the EmDrive thruster, the thrust is is produced by energy quanta emitted by it. This means that the velocity of exhaust fumes (energy quanta) is constant and equals about 300 000 km/s so the force of the thrust of the EmDrive will be given by the formula:

c – the velocity of the exhaust “fumes” (energy quanta)

This means that the force of the thrust of the EmDrive depends only on the number of energy quanta emitted per unit of time.

According to Model 31, the frequency of vibrations of quanta  of quantum gas is proportional to the temperature.

this means that the power of quanta is proportional to the temperature.

It specifically appears from the Stefan-Boltzmann law that the power of the quanta radiated by a body is proportional to the fourth power of its temperature.

P – the power of the energy quanta radiated from the area unit of the body [W/m2],

T – the temperature in Kelvin

Since the quanta with greater power are more compressed, more of them fit in a unit of volume, they have a higher density so the density of quantum gas is also proportional to the temperature.

Thus, the density of the quantum gas emitted by the body, such as the power of quanta, is also proportional to the fourth power of its temperature.

so definitely the force of the thrust of the EmDrive is proportional to the fourth power of its temperature of the quantum gas emitted by it.

This means a huge increase in the amount of the quantum gas emitted in a unit of time with a slight increase in its temperature.

This shows that the development activities related to this propulsion should also focus on increasing its operating temperature. For example, doubling of the temperature should result in a sixteenfold increase in the force of the thrust.

Because there does not exist a perfect insulation for quanta, with the current construction of the EmDrive, energy quanta propagate in all directions, and the thrust produces only the direction where the emission of quanta is the highest. This means that in order to increase the thrust in the propulsion, the surfaces which “waste quanta” should probably be quantum over-insulated.

If the above considerations prove to be correct, it will be excellent evidence (or even another experimentum crucis) for the existence of the world of energy quanta and the world of dark energy.

The lack of knowledge on the existence of the world of energy quanta makes physicists explain the phenomena related to this world with what they know, that is the world of atoms. Because they have no “atomic” concept for an explanation of the operation of the EmDrive thruster, voices are heard that this propulsion works contrary to the laws of physics and therefore no research work should be carried out in this direction. This is a strange behavior, because already for several years there has been evidence of proper operation of the EmDrive propulsion. This is so called the Yarkovsky effect, which makes the radiated energy quanta (quantum gas) be able to produce a thrust capable of changing the orbit of an asteroid rotating around the sun. In 2003 it was stated that under the influence of heat radiation from the sun, the five-hundred-meter asteroid Golevka within fifteen years changed the radius of its orbit by fifteen kilometers.

In a typical rocket engine, there is produced atomic gas which is considered to be the only source of the phenomenon of propulsion.