Recently, the world has become increasingly familiar with the Italian inventor Andrea Rossi and his heat generating apparatus called E-CAT. This is a device which produces several, tens of times more heat in relation to the energy input, and in certain periods it produces energy without supplying it from the outside. This phenomenon has already been named. It is called the Rossi Effect. In August 2015 in the USA, Rossi received the last patent for his invention (No. 9,115,913 B1 FLUID HEATER).
After a dozen or so years of tests, Rossi completely intuitively used in this apparatus a few steps from the construction of the heat generator presented in the note HOW TO RAISE THE BODY TEMPERATURE WITHOUT HEAT SUPPLY FROM THE OUTSIDE? He used nickel powder (step 2) as a heating medium. He used hydrogen (step 3) as a foreign body reinforcing the process of self-heating. The generator has an insulation (step 5). The heating medium is additionally heated by an electrical coil (step 6).
Let’s now compare the generator suggested in the above mentioned elaboration with Rossi’s generator (according to the 2014 patent). 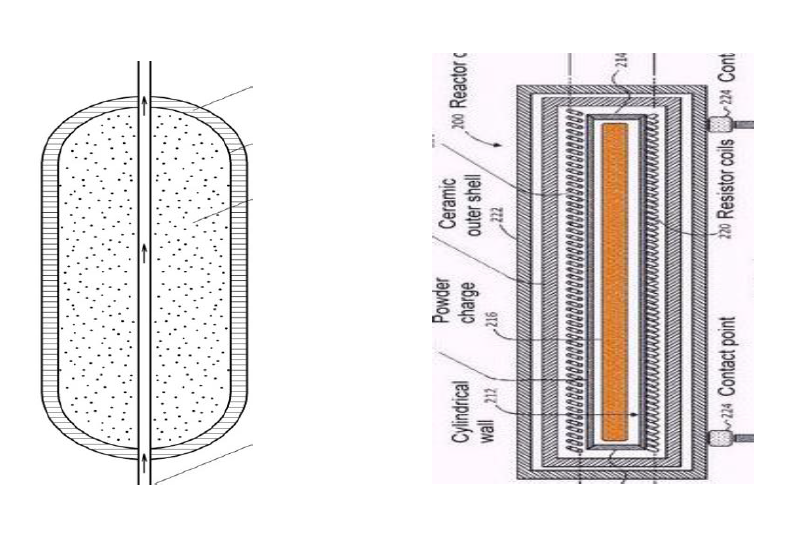 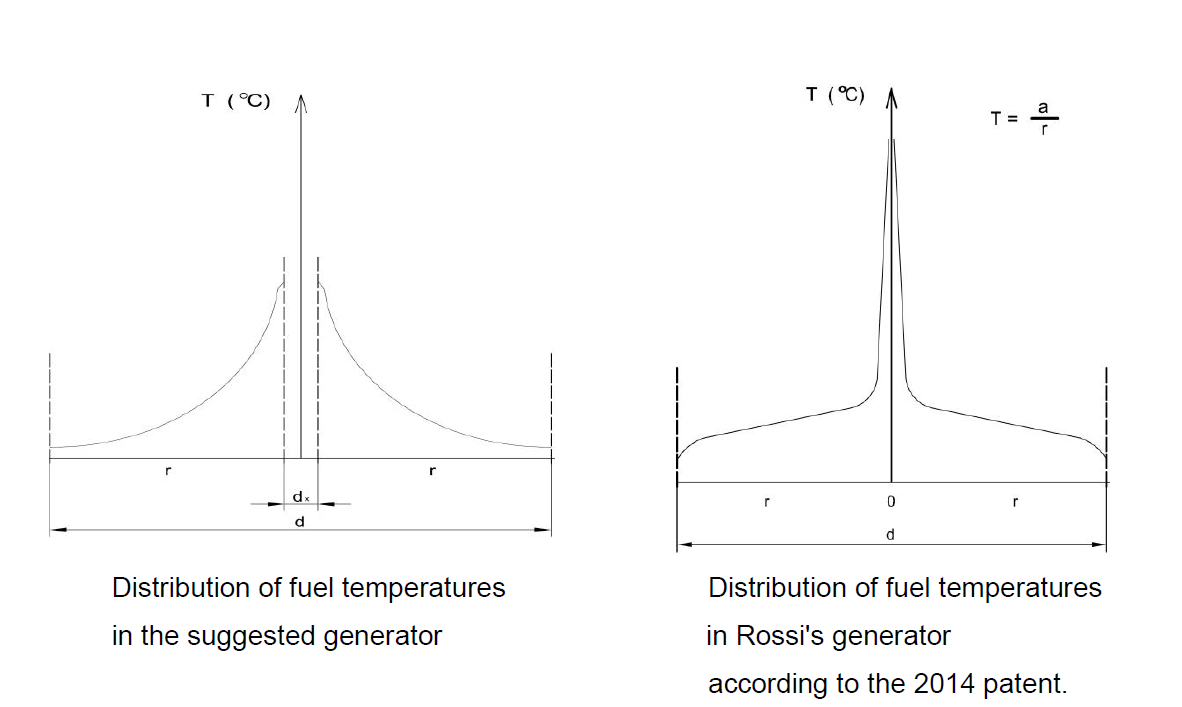 As seen, both heat generators are different in the distribution of fuel temperatures inside. It is clearly seen that the E-CAT generator has a primary construction defect. In the center of the cylinder, where the temperature increases rapidly, there is no element which allows the generated heat to be transfered directly out of this place. This means that the produced heat has to get out through the electric heaters and thermal insulation!!! This means that Rossi’s apparatus works in the state of unstable heat balance. Operation of the E-CAT device in such conditions makes it almost temperature uncontrolled, and since it has to be controlled, this is a huge challenge for engineers. The result of throwing Rossi’s generator off this kind of balance is its expiration or overheating. Overheating can lead to a thermal destruction of the generator, which in an extreme case means its explosion. For safety reasons, every E-CAT has to be tiny, because a small E-CAT = a small explosion.
The above is the reason why Rossi, in order to build a more powerful generator, has to connect in series or parallel tens of small generators with a power of a few, several, tens of kilowatts. This results in further, rapidly increasing complications related to the control of the E-CAT device. In spite of these difficulties, a prototype of such a device of 1 MW was made in 2015. It worked properly enough to be subjected to a one-year test. The result of the test is unknown so far because there was a great quarrel over money followed by a trial. The case was settled amicably, which bodes well for the future in this matter. Chimerical work and a 3 constant risk of explosion of the E-CAT device make Rossi have problems with obtaining a safety and quality certificate for his invention (obtaining the certificate for household usage will be especially difficult). This prevents a mass scale production of the device and a revolution in the energy market. Intensive work on this device has been going on for six years already without an end in sight. If the above mentioned primary defect of E-CAT is not removed, in ten years Rossi will still be in the same place as six years ago.
Physicist’s standpoint on the E-CAT device is bizarre. They think that “in the light of universally recognized and accepted principles of science” such great amounts of heat can be generated only through nuclear reactions. Therefore, they demand the author of the invention to show that his device emits harmful alpha, beta, gamma, and neutron radiation, because only such symptoms indicate a nuclear reaction. Wasting time and money, Rossi has attempted to detect such radiation. Although he has never managed to find such radiation, he used radiation shielding in his device for a long time.
Physicist also think that the lack of theoretical foundations for the operation of the device makes it unsuitable for technical application. This is why Rossi enters into alliances with big names of physics whose task is to create theoretical foundations for his generator.
Attempts of a theoretical solution for the above phenomenon appear. They are described as LENR (Low Energy Nuclear Reactions), that is nuclear reactions in low energies. Opinions on the topic are various, often very optimistic, like the following one.
“The quantity of heat emitted constantly by the reactor and the length of time during which the reactor was operating rule out, beyond any reasonable doubt, a chemical reaction as underlying its operation. This is emphasized by the fact that we stand considerably more than two order of magnitudes from the region [..] occupied by conventional energy sources.
The fuel generating the excessive heat was analyzed with several methods before and after the experimental run. It was found that the Lithium and Nickel content in the fuel had the natural isotopic composition before the run, but after the 32 days run the isotopic composition has changed dramatically both for Lithium and Nickel. Such a change can only take place via nuclear reactions. It is thus clear that nuclear reactions have taken place in the burning process. This is also what can be suspected from the excessive heat being generated in the process. […] In summary, the performance of the E-Cat reactor is remarkable. We have a device giving heat energy compatible with nuclear transformations, but it operates at low energy and gives neither nuclear radioactive waste nor emits radiation. From basic general knowledge in nuclear physics this should not be possible. Nevertheless we have to relate to the fact that 4
the experimental results from our test show heat production beyond chemical burning, and that the E-Cat fuel undergoes nuclear transformations. It is certainly most unsatisfying that these results so far have no convincing theoretical explanation, but the experimental results cannot be dismissed or ignored just because of lack of theoretical understanding. Moreover, the E-Cat results are too conspicuous not to be followed up in detail. In addition, if proven sustainable in further tests the E-Cat invention has a large potential to become an important energy source. Further investigations are required to guide the interpretational work, and one needs in particular as a first step detailed knowledge of all parameters affecting the E-Cat operation.” Two conclusions derive from the above. Nuclear transformations can take place also in low energies (temperatures). Then it happens without emission of harmful radiation nor radioactive waste.

Nuclear transformations are the effect of an increase of the “fuel” temperature, not its cause. The cause (mechanism) of the increase of the temperature is presented in the note HOW TO RAISE THE BODY TEMPERATURE WITHOUT HEAT SUPPLY FROM THE OUTSIDE?