WHAT IS THE ORIGIN OF THE UNIVERSE?

Let’s go back in time 100, 500, 1000 billion years. The Universe is filled with dark energy (ether). This is one-dimensional magnetic dipoles able to connect with each other by their poles into lines. However, they do not connect into lines because they move with a great speed and collide with each other. Their collisions are elastic. There is nothing except ether. There is no light, temperature, heat, mass. Everywhere there is darkness, silence, and dreadful cold. After “certain time”, some fluctuations occur in the ether. This leads to the creation of field lines (strings of energy) from the ether. These strings are arranged in a chaotic manner. It is still cold, quiet, and dark. The number of strings is still growing. At “a certain moment”, in the world of these lines-strings, fluctuations appear. Some of them change into elastic, two-dimensional, vibrating springs. These are quanta of energy. They are few at first. They appear and disappear (they become lines again). However, with the passing of time, when there are more and more of them, the quanta start to collide with each other. They collide and they do not disappear any more. The mutual, elastic collisions keep them alive. Their speed between the consecutive collisions is constant. The stability of speed between collisions is ensured by ether, dark energy which quanta are created from. From the previous considerations we know that the creation of quanta means creation of heat and temperature. In other words, the Universe has entered a self-heating phase. Initially, the amount of quanta is little, so the temperature of the Universe is only slightly higher than 0 degrees Kelvin. Over “time”, the amount of quanta increases. Their concentration is intensifying, the distances between quanta are smaller and smaller, the frequency of their collisions is growing, adn this means that the power of quanta is larger and larger, and larger is the temperature of the Universe. It is still dark and cold, but not “quiet” any longer.

The temperature reaches hundreds of thousands of Kelvins. The number of quanta is growing and their power is getting bigger. There appears ultraviolet. The temperature is rising. X radiation appears. But that is not the end. More and more quanta are created, yet there is less and less ether. Gamma radiation appears. The power of gamma quanta is getting bigger. The whole cosmos already is but one great gamma radiation (very harmful to health). When will this temperature madness end?

Finally, there is a limit. This is the process of pair production. Complex gamma quanta in the process of production change into electron-positron pairs. Over time, the number of electrons and positrons is growing, so the amount of energy quanta is decreasing. This process results in a decrease in the temperature of the Universe. At some point, at a proper concentration, electrons and positrons begin to connect with each other in the manner presented in Figure 17 in the main elaboration. There are created so called positronia, which later combine into larger aggregates, and the final product of this process is protons. After each proton has been created, one free electron is left. This means that all positrons have been used to build protons.  Thus, the phase of production of protons has ended. Protons and electrons are stable particles. An electron can sometimes neutralize a proton, which results in a neutron. Neutrons are created and they disappear since they are unstable. However, if during a short time of the existence of a neutron, a proton combines with a neutron, there is created a durable nucleus of deuterium. Over time, the number of deuterium nuclei is growing. On the other hand, when two deuterium nuclei combine, there is created a durable helium nucleus. Some nuclear nuclei can combine with free electrons, which results in creation of the above mentioned elements. So ended another phase of the evolution of the Universe, that is the production of nuclear nuclei of light elements from protons. At this stage, the outer space is filled with existing side by side nuclei of hydrogen and helium, atoms of hydrogen and helium, electrons, and residual amounts of energy quanta (almost all quanta have been used to build protons). This means that the Cosmos, after the stage of incredible heat, cooled down to the temperature close to zero degrees Kalvin. The state of aggregation of atomic matter presented above can be called space plasma.  From the previous chapters we know that all components of space plasma are field active. Energy quanta are simple magnetic dipoles. Electrons have a spin; they are carriers of elementary angular magnetic dipoles, and carriers of elementary negative charges. Nuclei of hydrogen and nuclei of helium are carriers of elementary positive charges, and carriers of elementary gravitational charges, while atoms of hydrogen and helium are carriers of elementary gravitational charges. None the less, plasma as a whole was completely neutral. There was not even a trace of electric, magnetic, or gravitational field in it. This absence resulted from a perfectly chaotic motion of particles colliding with each other, which were included in plasma. Fields may appear only when the components of plasma have been precipitated from this perfect chaos and moved to any ordered motion. In order the Universe could continue to evolve, something must have precipitated the components of plasma from chaotic motion.

Fortunately, there was such a physical phenomenon (anyway, still present today). It consists in the fact that a charged particle moving perpendicularly to the lines of the magnetic field begins to move around a circle (see the figure below). 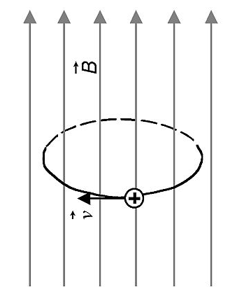 On the other hand, a lot of such charged particles moving around a circle form an electric field loop in which a magnetic field is generated. 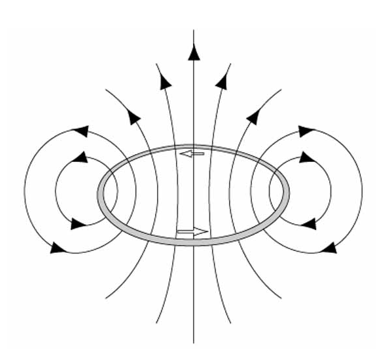 These two simple physical dependencies lied at the core of the star formation from the sea of plasma filling the Universe. 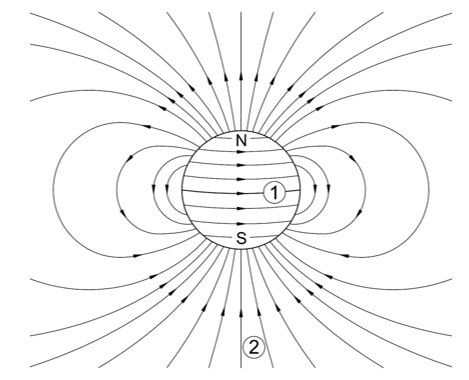 The demonstration of the gravitational properties results in another effect. Two different in density components develop in the rotating ball. In the inside, there has been created a heavier nucleus consisting of nuclei and atoms of helium; in the outside there has been created a lighter atmosphere consisting mainly of nuclei and atoms of hydrogen. 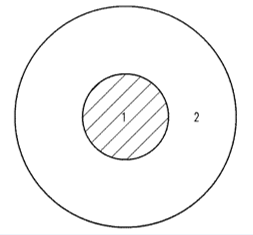 Differences in density of the nucleus and atmosphere give rise to differences in their velocities (rotational and linear), which in turn causes that these star components (nucleus and atmosphere) begin to rub against each other, generating heat at their contact point. The self-heating process of a future star has begun. Thus, in the sea of space plasma, embryos of stars appeared. Such embryos emerged simultaneously across the entire Universe. Since they generated gravitational fields, among them there was a ruthless struggle to survive. The quicker one to generate a stronger gravitational field (collect more mass) was the quicker one to attract smaller neighbors and expand at their cost. With an increase in the mass of a star’s embryo, its fields (gravitational, electric, and magnetic) were growing, which resulted in an increase in the speed of its rotation; its temperature was rising. This is how ordinary stars originated. Their diameters oscillated from several hundred kilometers to several hundred million kilometers. The greater a star was, the higher temperature it reached.

When the distances between stars became great, gravitational forces decreased so much that great stars could not “devour” their smaller neighbors any more. The rotational movement of great stars only kept smaller stars on their orbits. On the other hand, the smaller stars kept even smaller neighbors on their orbits. This is, among others, how our Solar System came into being.

As the distances between stars kept growing, the gravitational forces between them already became so small that resistances to motion of the primary quantum gas equalized them, which caused that stars occupy  a permanent place in galaxies, super galaxies, galaxy clusters, and other systems of this type.

As stars “were absorbing” components from the primary plasma, their concentration in this plasma was decreasing. The decreasing concentration means that the free path between one and another collision of protons, electrons, nuclei of helium increased. If the free path expanded, this means that in the interval between collisions, quanta could give these particles a greater velocity. In other words, when stars were absorbing the components of plasma (nuclei of hydrogen and helium), the concentration of these particles in plasma was decreasing, thus their velocity in the interstellar spaces was increasing.

Finally, the concentration of free particles in space plasma became so small, and their mean free path so long, that they began to travel intergalactic distances at a speed slower-than-light. This phenomenon is now called a cosmic radiation, and its source and mechanism are considered to be incredibly mysterious.

Crossed electric and magnetic fields of stars are a necessary precondition for the existence of stars. They are the source of the rotational movement of stars, which stabilizes a star in space and is a necessary precondition for a rise and maintenance of the temperature of stars. A magnetic field is “visible” outside the atmosphere of a star; an electric field is “hidden” under the atmosphere of a star.

All spherical bodies in the Universe are stars and they are practically the same age. The Sun, the Earth, and the Moon have the same age. This also comes out of physicists’ research, although they completely disagree with it.

Stars were born at a certain stage of the evolution of the Universe and that stage was definitely completed, because the material necessary to build it had been used. It was about 4.6 billion years ago.

Cosmic radiation (traveling in space protons, electrons, nuclei of helium) is the “remains” of plasma, which had filled the Universe before the stage of the star formation.

From the main elaboration and the above considerations, the following can be concluded. Each atom, individually, in the microscale, constantly reproduces the first two stages of the Birth of the universe. First, it produces strings of energy from ether, then it produces energy quanta from the strings (precursors of electrons and positrons), from which atoms can be produced in appropriate conditions.

The lack of knowledge on the existence of the world of dark energy and the world of energy quanta caused that, with reference to the Universe, physicists started talking about the existence of such unrealistic formations like black holes, neutron stars, self-gravitating clouds, and others.

All of the above considerations are briefly presented in the figure below. 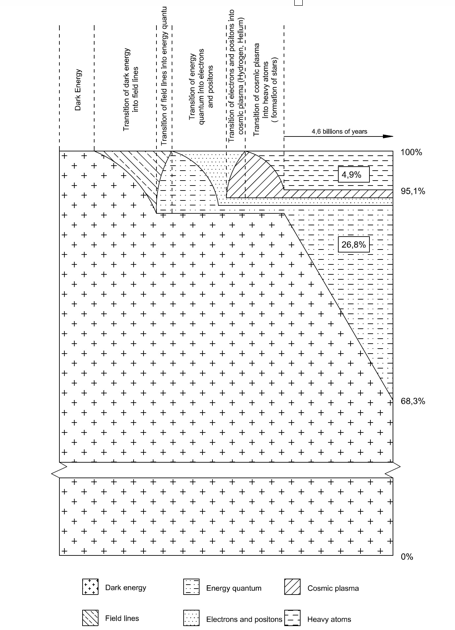